What is a Down Duvet and How Does it Differ to Normal Duvets?

There are three types of down. The first is natal down, which baby birds are either born with or develop within the first few days of their lives. Body down is the fine layer of soft, barbless feathers that lie next to an adult bird’s skin, whilst powder down is a specific type of feather that never moults but breaks down over time into a type of dust. Powder down is the type ofdown most associated with any allergies in humans.

People have been making use of the warmth and softness of down for centuries and it makes a perfect filling for duvets, thanks to its lightness and ability to trap air, making it feel luxurious whilst offering superior levels of comfort. The word ‘eiderdown’ refers to the bed cover used by previous generations on top of their sheets and blankets to provide additional warmth on cold winter nights. These were traditionally filled with down from the Eider duck, hence the name. 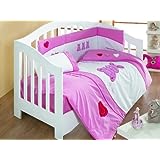 In England, our sheets and blankets were replaced by the modern ‘continental quilt’, which had been used across Europe since at least the middle of the eighteenth century. This concept of taking what was essentially a large cloth bag stuffed with feathers quickly gained popularity in this country as people no longer had to wrestle with many layers of sheets, blankets and eiderdowns. Changing beds became easier and quicker and people were quick to see the advantages of the new system.

It became apparent that a few people were allergic to powder down, which can form over a period of time in even the best quality down. Synthetic fillings became popular for their anti-allergenic properties and cheaper pricing structures. Unfortunately, synthetic fibres are unable to offer the warmth and comfort of a down duvet, which traps air, fluffs up easily and drapes well to insulate the body to maximum effect.

Down duvets outlast and outperform all rivals, making them extremely cost-effective over time. It is possible to acquire a down duvet from Cushy, for example, from a little over £20, which is comparable to rival products. Whilst a synthetic duvet will gradually lose its density and loft, becoming lifeless and flat, a down duvet can be shaken to instantly revive and refresh its bulk.

Modern developments in materials prevent any parts of the down escaping, offering a good solution to the problems that can be caused by powder down. Moreover, down can be processed, cleaned and sterilised to a very high standard, thereby minimising any annoying effects, making it a safe and hygienic option for most people.

Jennifer Watson has over 15 years’ experience working in interior design and has been published in a number of magazines and online websites. A busy working mother, Jennifer would be unable to cope without a warm and comfortable night’s sleep and values every moment spent beneath her down duvet from Cushy.

Do More at Home to Make Your Family Safer

Five Things Everyone Should Know About Green Pest Control Solutions

Where Is the Best Place to Live for Peace and Creativity?